THE MAKING OF FIVE EASY PIECES 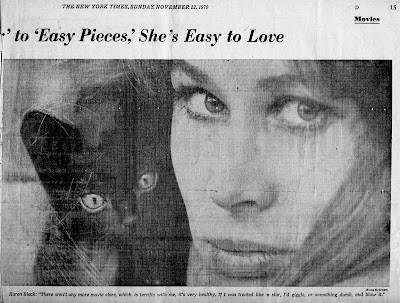 There were many endings for “Five Easy Pieces” and only toward the very end of the shoot did Bob Rafelson, Jack and all the members of their company -B.B.C.- agree upon which one it would be.

Copyright 2016 Stephen Eckelberry
Posted by Karen Black's Diary of an Actress at 8:05 PM

Karen is so adorable with everyone on 5EP and the wonderful special moments they shared while making the film and also Nicholson above all praising her acting talents.

Love and missing you so much Karen, from love from a late fan in this new generation of today.

I want to extend my thank you to Stephen, for sharing this entry of a great, remarkable, funny and gifted lady with a beautiful heart who touched so many others too.