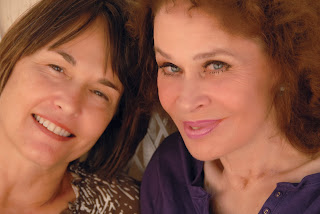 About a year ago, Karen reunited with her biological daughter.  The last time she saw her before that was the day she was born.

You see, many years ago during her first year at Northwestern, still a teenager, Karen gave up a girl for adoption.  She called her Nina.  Her father was a young Drama student, Robert Benedetti, with whom she remained friends till the day she died.

Illinois had, until recently, very strict closed adoption laws.  It made it virtually impossible for biological mother and child to connect.  What made it even more difficult for Karen was that in the 80s two different people approached her through her agent saying that they were her real daughter.

But the dates didn't match.

That made me her a little gun shy about trying to find her daughter.  Her brother Peter and I both tried going through the Illinois authorities, but it was not fruitful.

Then on August 7th, 2012, I checked Karen's FB fan site and found the following message:

"Hi Karen, Illinois has recently allowed adoptees like me to access their original birth certificates. I just received mine today. I was born on March 4, 1959 at Cook County Hospital, and the name listed for my mother is Karen Blanche Black. Would this happen to be you?"

The dates matched.  And this is what Karen wrote back:

"I am. Been a long time. I hated leaving you behind, turbulent waves of sorrow. thank you for making this possible Diane. Your father is still a good friend, a genius, a professor, a television producer. you will love him. we will all love each other. I'm kinda stunned."

Since then Karen and Diane reconnected, she stayed at our house a number of times, even managed to paint together.  She help care for Karen when she could, helping us when she visited when the cancer started taking its toll.    The talked emailed and texted many time, staying close until the end. 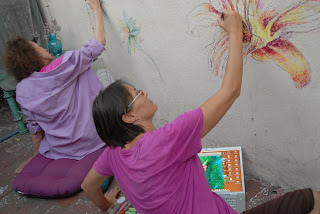 Posted by Karen Black's Diary of an Actress at 9:19 PM

Unknown said...
This comment has been removed by the author.
11:11 PM

This I never knew...I am so happy she was able to reconnect with Nina/Diane before she went in to the great beyond. Truly wonderful.

I thank God that He orchestrated this beautiful meeting of mother and daughter. I know my friend Diane's life has been so much richer since she made the connection with her birth mother.

Jana B., you thank bullshit for your imaginary make-believe play.