I'm remembering Dudley Moore, certainly one of the best film comedians of all time, when he said, "I took the money. I'm not crazy." which turned around the ending of that film: "Arthur". We remember that moment and remember Dudley in that moment. Now he's gone. That moment remains.

But there's more to be said here: what Dudley brought to the playing of that line was years of comic timing practice doing "Beyond the Fringe" in his New York days, his own skill as an actor earned through more years of practice, also a born-in talent for comedy. So much was drawn from

to create the utterance of that line!

Remember when Vivien Leigh said, in "Gone With the Wind", "As God is my witness, I'll never be hungry again!"? We can't forget her there, kneeling in the dirt, clutching some shabby vegetation in her fist. Later, in the hands of the psychiatrists at that tine, her tuberculosis was treated as a mental illness and she received shock treatment for no reason and her life started to fall apart at that point I'm assuming. But in her past, it was her incredibly hard work – she used to ask Selznick if she could stay and shoot more scenes and this was after a twelve hour work day - her gift for affecting the viewer, her skillful grasp of character, and her ability to bring up from within herself the need, the longing, the sense of stark decision that gave the saying of that line what it took to have it resound throughout cinematic history.

When an actor is acting – it's life or death- get it right! Perform each moment as if that is the only moment in the history of your short life.

There are hours that it takes to paint a painting and then there it is – the hours that it takes to write something and there it is. But for the actor? No. He's right: his legend, his legacy is only gained if and when he can bring himself completely to the tiniest flicker of time -. Strangely, that's all he has, all an actor will ever have to carve his name into the annals of history. 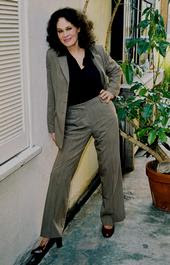 I hope you've seen "Hollywood Dreams" that I'm in -
Henry Jaglom's glamorous and witty film starring the winsome Tanna Frederick, with masterful actor Justin Kirk and music by Harriet Schock!
It's been number one for TWELVE WEEKS at one of Laemmle's most prestigious theaters, (though the Laemmle are ALL WONDERFUL and prestigious), the Sunset 5!
After this long run, this film is continuing at the Music Hall on Wilshire Blvd. in Beverly Hills.
I love the part I play in this movie, though it's a character that no one else in the movie likes because she's such a bitch but - she's still there flirting her way through another matter of weeks at the Music Hall - and if you haven't see the film, it's a must.
It's also playing across the country, for schedules and more info look here: http://www.hollywooddreamsthemovie.com/
Oh! I almost forgot. You know I've made more than a 100 movies. My dear husband did the miraculous by distilling all that work into eight gorgeous minutes of film. You have to see it to believe it. It's getting great notice on youtube:
http://youtube.com/watch?v=4z0AoQTRjtA
Love to all,
Karen
Posted by Karen Black at 12:27 AM No comments: