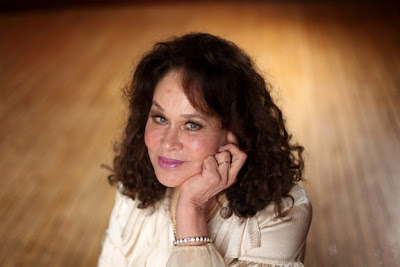 Karen Black's ready for her close up

Actress Karen Black has garnered a reputation over her four-decade career for being a somewhat strange star of the silver screen. Her roles in movies like Five Easy Pieces, the Great Gatsby, Nashville, and The Day of the Locust have earned her two Golden Globes, an Academy Award nomination, and a Grammy nod.
She first popped up on the radar in the epic road movie, Easy Rider, but somewhere along the line Ms. Black began to earn the reputation of being the Queen of the C’s, and, in fact, in some cases the movies she made might not even make it to the Z’s.
It’s tempting to feel like you’re stranded on Sunset Boulevard in her company, but the sweet and affable actress is certainly not for want of work.
She has five movies out this year, and just finished shooting a David Lynch-produced sequel to the 1980s film, Repo Man, called Repo Chick, and a Will Ferrell produced pilot for HBO called the Magic Balloon, in which she plays one-half of a husband-wife team that produces oddball corporate videos.
She has also written and starred in her own play, the Missouri Waltz.Ms. Black sat down with the Ampersand ahead of her new one-woman show, My Life for a Song, a retrospective of her career in film, stage and in song, which will be debuted at Toronto’s Gladstone Hotel this weekend.